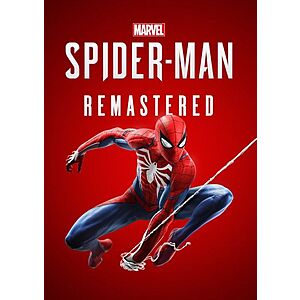 Thanks to community member Emre27 for finding this deal.

Note: A Steam account is required to activate and play the game. The game will be released on August 12.

Game Details: [LIST][*]Developed by Insomniac Games in collaboration with Marvel, and optimized for PC by Nixxes Software, Marvel’s Spider-Man Remastered on PC introduces an experienced Peter Parker who’s fighting big crime and iconic villains in Marvel’s New York. At the same time, he’s struggling to balance his chaotic personal life and career while the fate of Marvel’s New York rests upon his shoulders.​

Thumb Score: +22 Dell Refurbished offers an Extra 50% Off select Refurbished Latitude 7390 Laptops when you apply coupon code 7390SAVE50 at checkout...