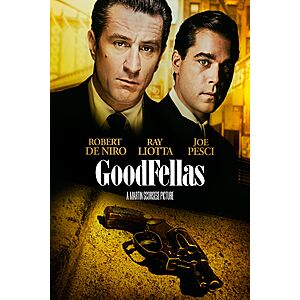 Thanks community member cheebong for sharing this deal

About this film: [LIST][*]Martin Scorsese’s unforgettable film of Nicholas Pileggi’s true-crime best seller “Wiseguy” is presented here in a stunning new remaster. Arresting performances from an all-star cast led by Ray Liotta, Robert De Niro and Lorraine Bracco drive this brutal yet darkly funny narrative of life in the mob. Nominated for six Oscars, with a win for Joe Pesci, and named one of the AFI’s top 100 American movies, this instant classic would forever change the rules for gangster films to come.