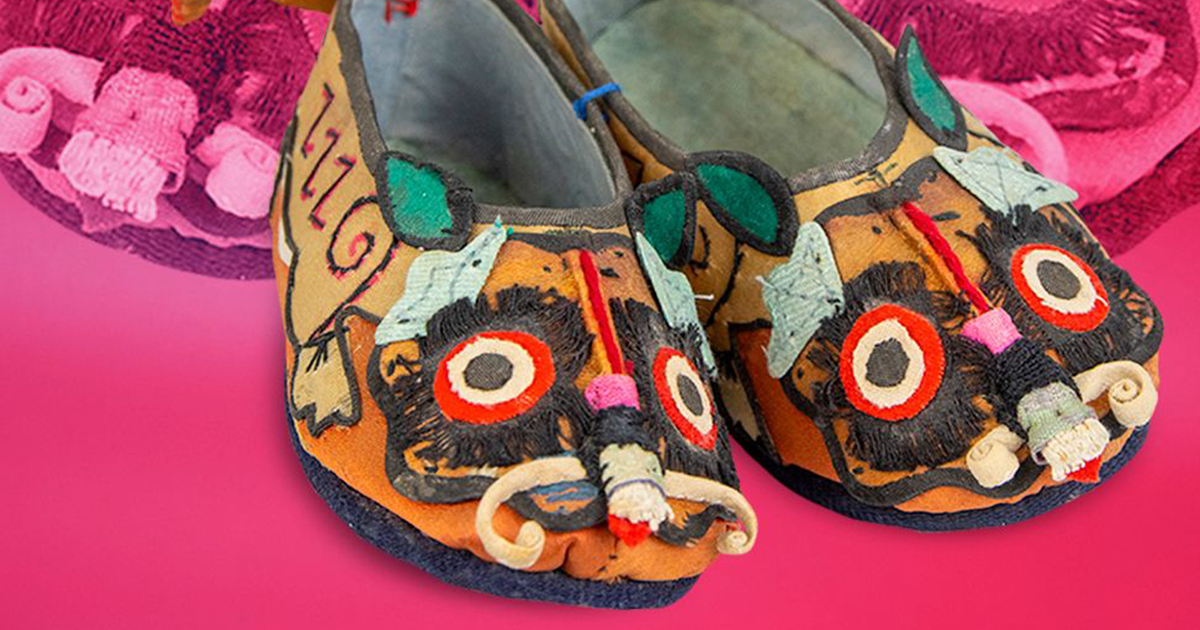 When it comes to strange and historical fashion statements, Ripley’s Believe It or Not! has collected the best of the bizarre over the years, and in honor of this year’s Met Gala, we are rolling out our favorites! 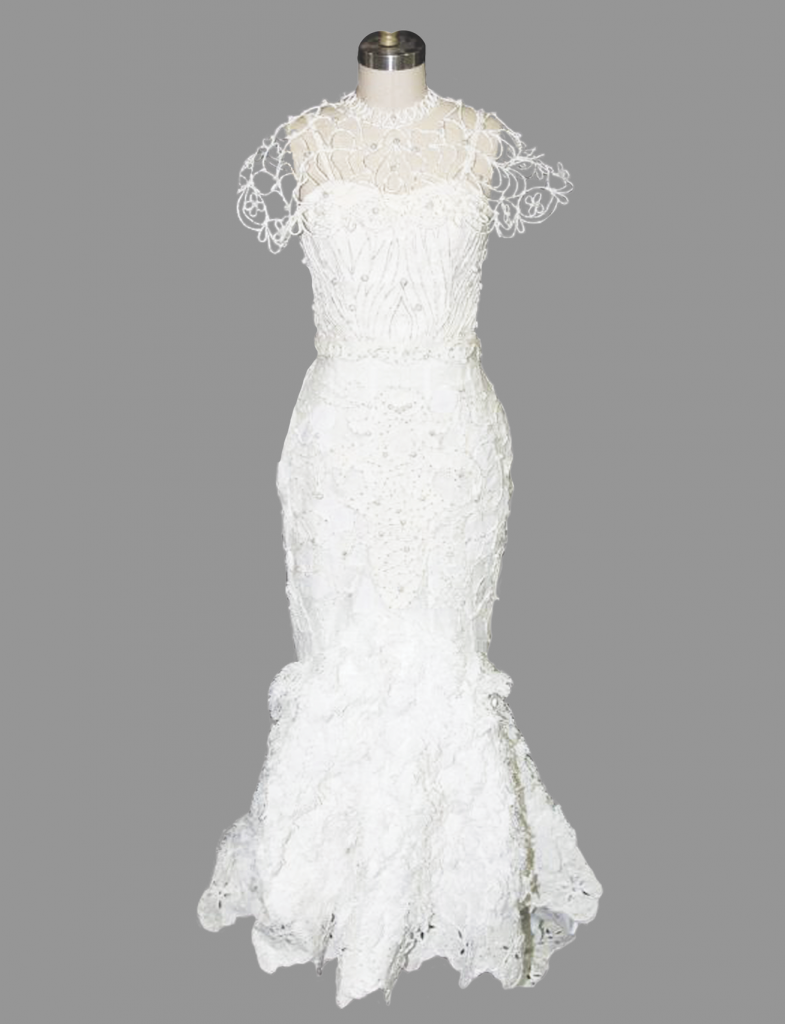 Back when the contest first aired on The Martha Stewart Show, Edward Meyer (Ripley’s exhibit buyer at the time) knew we had to get involved, and in the eleven years since, Ripley’s has proudly been a sponsor of this great contest.

Here are some of the rules designers had to follow:

This dress was created by Robert Bernard de Leon of Orlando, and is composed entirely of spiderwebs found near the artist’s home. Featured in the bodice is a genuine six-inch Mexican tarantula spider! 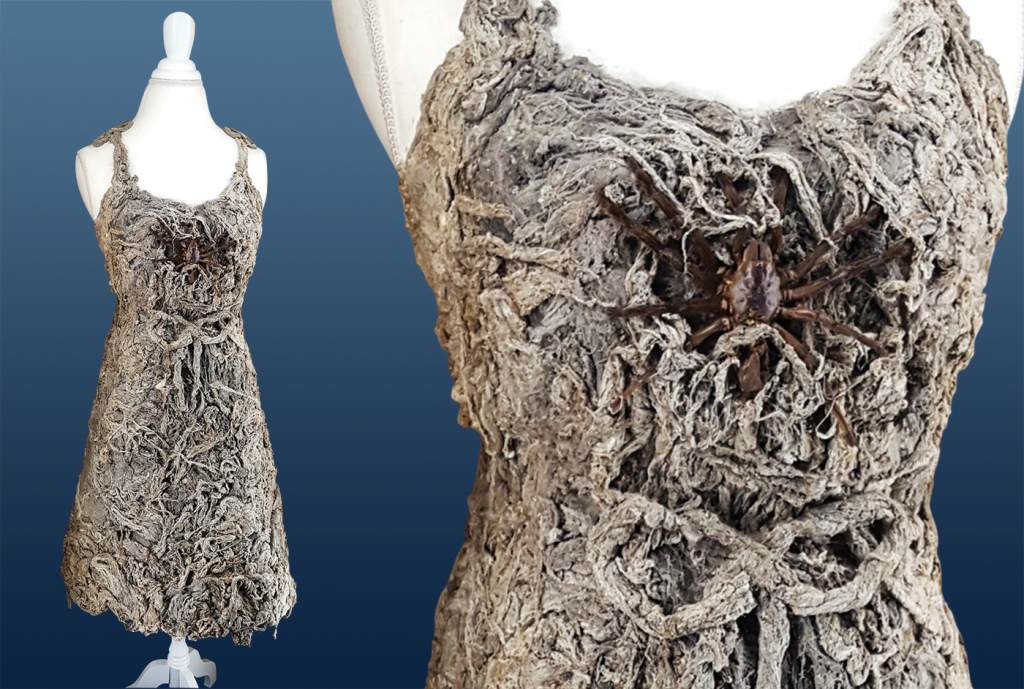 Ripley’s owns several paintings on cobwebs, but this is our first three-dimensional cobweb sculpture! Unfortunately this dress can’t actually be worn; it has been glued on the mannequin in order to prevent damage to the webs and maintain its shape.

It is customary in Chinese culture for every child to be assigned an animal at birth that the family believes represents their personality. A cap and slippers are then designed in the form of the chosen animal, like the lion-faced slippers shown here, and presented to the infant. 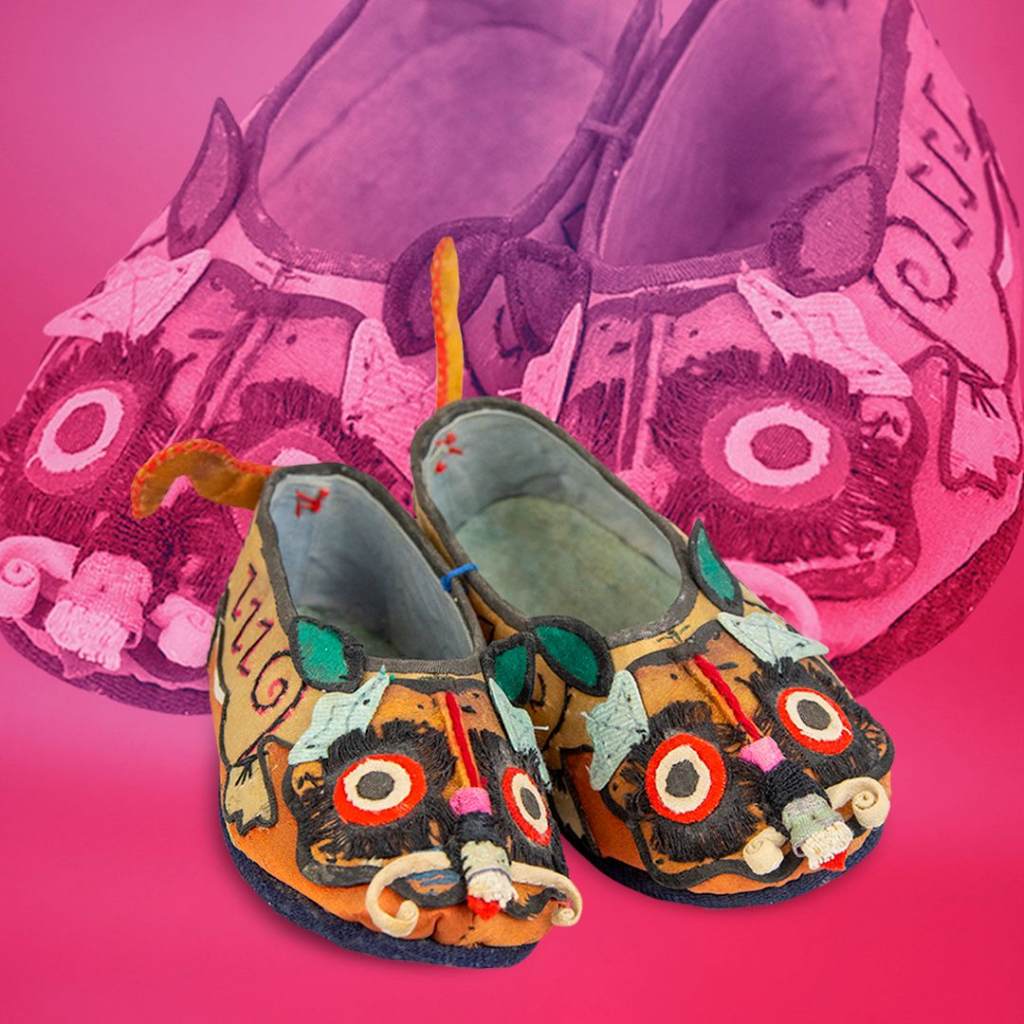 When called upon to execute a person guilty of murder, shamans from Australia’s Aboriginal peoples were said to wear shoes made of emu bird feathers and human hair, all matted together with human blood. Sometimes known as kurdaitcha shoes, these were worn by the ritual executioner, or “kurdaitcha man.” 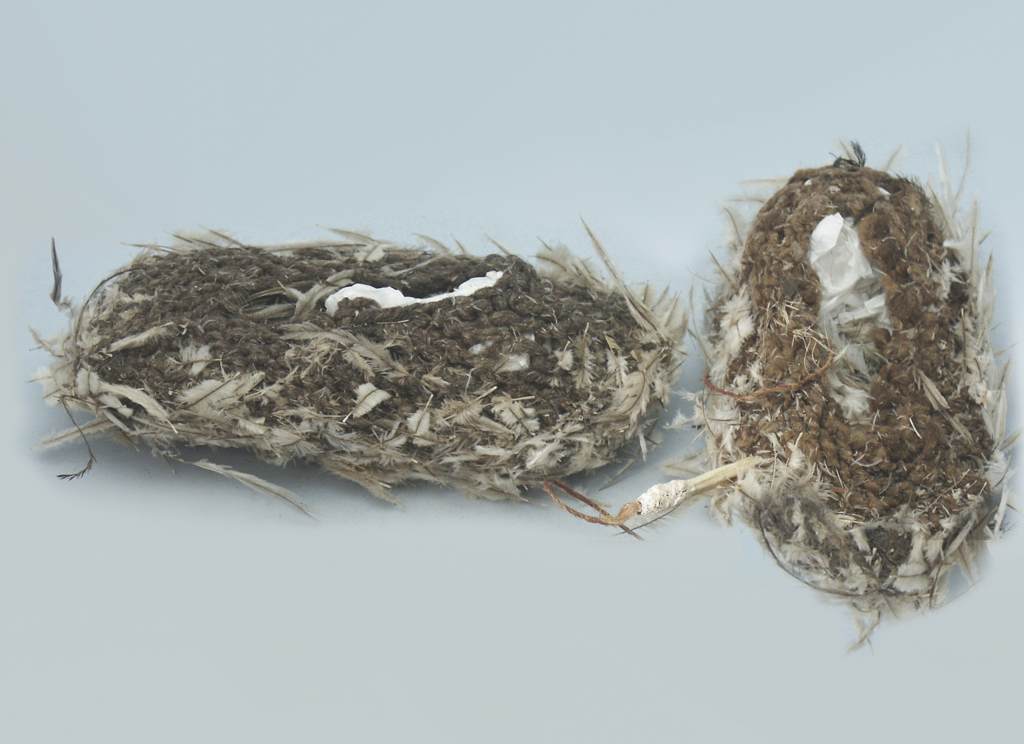 The shoes are called “interlinia” in Northern Australia and “intathurta” in the South. The oval-shaped footwear have an opening in the center and are secured upon the foot with a band of human hair. It was believed that these shoes would leave no tracks and assuring a clean getaway. When not in use, the shoes would be kept wrapped in kangaroo skin or hidden in a sacred place.

Back To The Future Part II Shoes

Designed by Nike designer Tinker Hatfield, these sneakers were worn by Michael J. Fox when he time-traveled to Hill Valley in the year 2015 in the 1989 movie Back to the Future Part II. Although the shoes appeared to lace themselves in the film, the effect was actually achieved by people pulling the laces through holes on the ground off-screen! 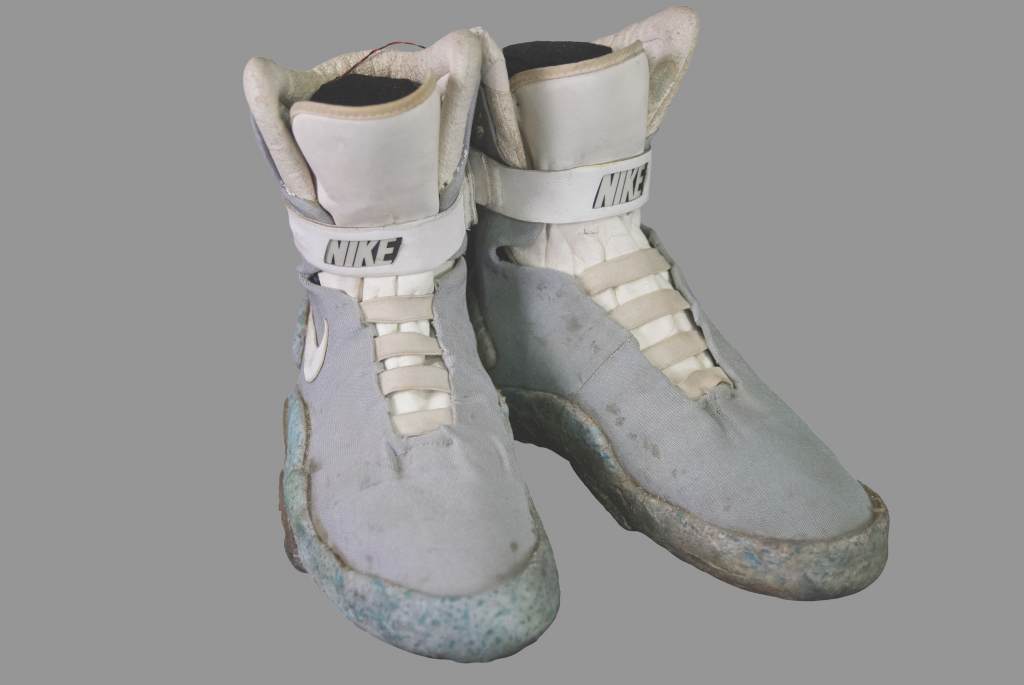 But fast-forward to a few years after the movie took place, and the internet was all abuzz when self-lacing shoes became a reality.

The Apple company filed a patent back in 2019 for a motorized adjustment system so that the shoe would lace itself just like in the film, but Apple wasn’t the only company on the verge of bringing these shoes to life. Nike had been working on a self-lacing shoe for years and released the extremely limited Air Mag shoes in a raffle, where all the proceeds went to the Michael J. Fox Foundation for Parkinson’s Research.

An ingenious example of fashionable recycling, this clutch purse is made entirely out of wine bottle corks! 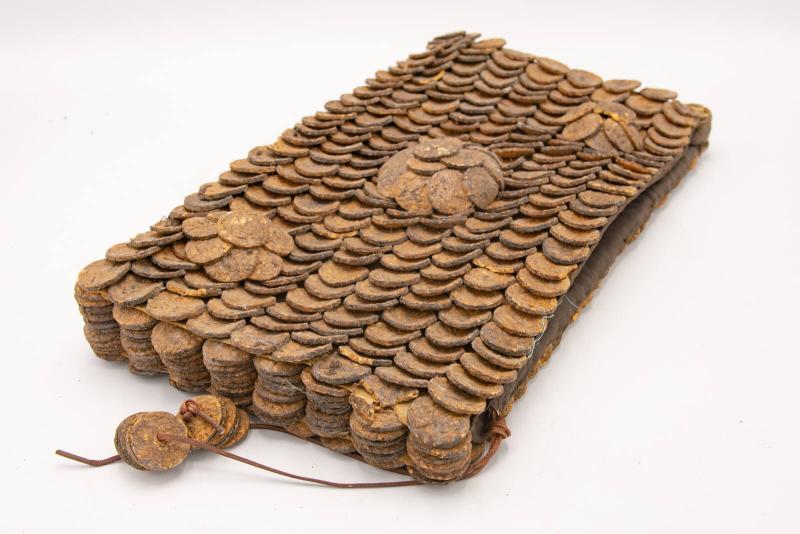 Cork has been known to make life boats, life preservers and even ping pong balls, but is most often used as a stopper in bottles of wine. Now we can add fashionable accessories to that list!

No fashion statement can be complete without the proper accessories, namely this antique bat tooth necklace. This woven necklace is lined with two rows of teeth from the flying fox bat, the largest species of bat in the world, and one row of small polished shells. The people of New Guinea would hang nets between trees to trap the flying foxes. Once captured, the bats were eaten and their teeth saved for the jewelry. 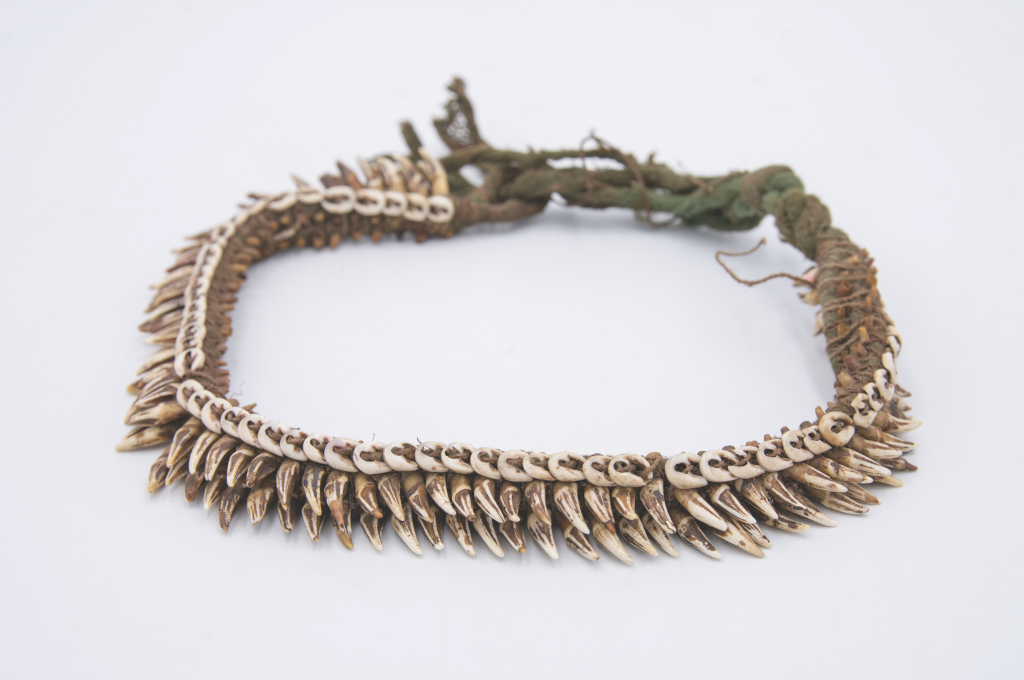 This list is just the beginning! You can check out tons more of these fashion oddities at one of our Ripley’s Odditoriums!

Source: An Anthology Of Ripley’s Fashion

Whiskey Business: Is Scotch The Future Of Fuel?